As a part of a client’s stormwater pollution prevention plan, John at Westwood Professional Services visits active construction sites once a week and collects photos and data using the GeoJot+ mobile app. He keeps a company iPad in his car and usually does his inspections on the way to or from work. If he forgets the iPad or has an unexpected trip, he uses GeoJot+ on his personal Android phone.

Before he goes out into the field, he creates his GeoJot+ data collection forms using the GeoJot+ application on his computer. If he finds he needs to modify his data collection form in the field, he can also do that on his mobile device. All he needs in the field is his mobile device running the GeoJot+ app, no pens, no paper, no cameras. As he takes each photo, the app automatically captures the direction he was facing, he fills out his form, and he takes any additional field notes using the app. The app will also number the photos as they are taken. 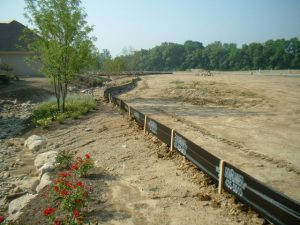 During his erosion control inspections, he checks silt fences, seeding, and erosion control blankets. If there is a problem on the site, he takes pictures if it and captures descriptive field notes. If there aren’t any problems, he takes a picture noting that everything is fine. He also captures photos of specific storm structure items.

As he uploads the photos back to the office via the cloud, they are automatically sorted by site and put into separate folders which saves him time during report generation back in the office.  Now that he is using the GeoJot+ app to collect the field inspection data, there isn’t much office work required.

John used to manually create his client reports but now GeoJot+ is saving him a lot of time. They watermark date and time on the photos and developed a GeoJot+ report which meets state requirements. The overview map he creates in GeoJot+ shows the contractor where he was on the site. They email the report to the client who reviews it so they know what is going on at a site and so the contractor knows if something needs to be fixed. They archive the reports in case they are ever requested by the state. His life is easier and he gets his work done faster.